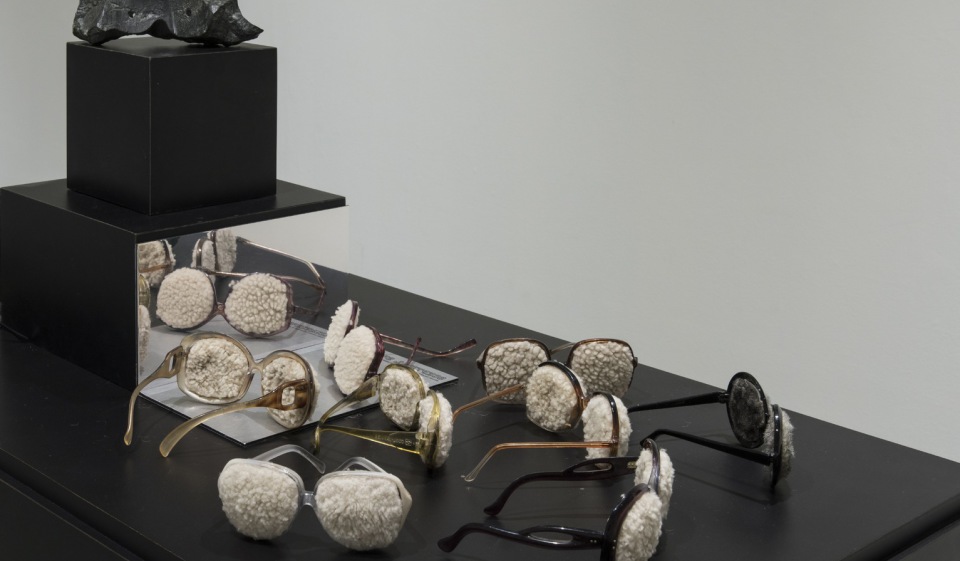 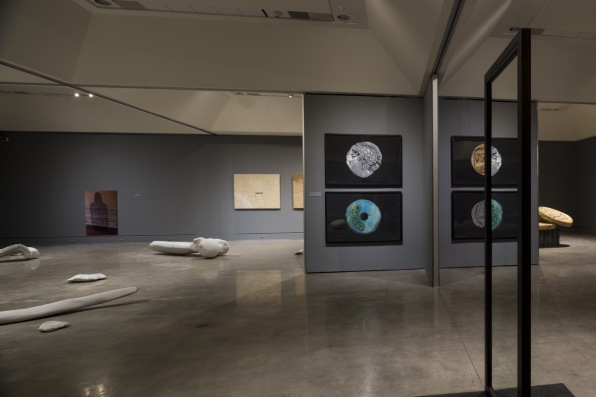 Neither Here Nor There, a small early piece (1973) by Nova Scotia sculptor John Greer, is a good entry point to this major retrospective exhibition of the artist’s work. It is a small hand mirror with the words neither here nor there painted on the mirrored surface. If you focus on the words, you can’t see yourself, but if you focus on your image, you can’t read the words. As the play on words indicates, the work is about ambiguity. A theme that is a constant in the artist’s work throughout his long career.

Even the title of the exhibition is ambiguous—retroActive rather than retrospective. (Yes, the lower case r and upper case A are intentional.) To Greer, it is not about a lifetime of work, but rather about a place in time in the life of an active artist. He told me that he sees himself as a dot on a continuous line of time. In the title of her essay in the exhibition catalogue, Andria Minicucci quotes Marshall McLuhan’s famous words about marching backward into the future while looking at the present in a rear-view mirror. McLuhan’s words are a fitting metaphor for Greer’s approach to both art and life.

Greer was born in Amherst, Nova Scotia in 1944, the same small town where Alex Colville was raised. He studied art in Montreal, but he spent most of his professional life teaching at the Nova Scotia College of Art and Design in Halifax. He started there in the early 1970s, at the college’s birth as a centre of conceptual art and early works in the exhibition lean heavily in that direction. A telling work from this period is Sceptical Spectacles (1974) that is a pair of old sunglasses whose eyepieces have been covered with sheep’s wool. He told me that people were telling him that he was pulling the wool over their eyes and this work was his answer to them. Some of his early works like Sceptical Spectacles and Neither Here Nor There are gentle throwbacks to Dada, but very much in the spirit of conceptualism.

The real story of this retrospective, however, is the artist’s move from an art that was heavily based on theory to one that is more traditionally object based. That’s not say that later work is less cerebral. Quite the contrary. Greer steadily matured in both his thinking and his execution. The quality that I appreciate the most in his late works is their sheer beauty as sculptural objects.

Much of the time, I am among those critics who complain that sculpture is something to trip over while backing up to look at a painting. This is certainly not the case here. Greer’s sculpture draws me in and holds my interest.

It’s difficult to single out individual works for comment as the exhibition is large and takes up much of the gallery’s total viewing space. Single Grain of Rice (1991) is an outsized reproduction in white marble of, of course, a grain of rice. It’s quite beautiful sculpture placed on a dark floor and highlighted by a single spot light. Greer is interested in the role that rice in the development of civilization and he’s right, but the work is transcendental in its own right. Two more recent examples are Moving Forward, Looking Back (2011-12) and its companion piece Time Keeper (2012). As the titles suggest,  they hearken back to the McLuhan quote about looking backwards while moving forward through time. The first piece resembles an ancient Chinese wagon dug up from a tomb site like Xian. Indeed, that was his inspiration. Greer has a deep knowledge of ancient history which he freely uses in his work. The major figure sitting on top of the wagon is is looking backwards, as is the sole figure on Time Keeper,.

We are back to the idea of time as a point on a continuum, like Einstein’s theory of time and relatively. Everything that has existed exists now or will exist and is relative to time. No one, not even artists, can predict the future much less understand the past. We are fated to be dragged kicking and screaming into the future. Artists, like Greer, provide us with a window from which to view our place in history as we go.

Greer is not all doom and gloom. Far from it: much of his work is playful. Many of his titles are plays on words and some works deceive the viewer by fooling them with his use of materials. Age of Irony (2006) looks like a solid rusty iron copy of an archaic Greek full size figure hanging upside down on the wall, but if  you touch it, you that it is made of polystyrene and weighs in at only a couple of kilograms. Counter to this work are two large sculptures of feathers, Gravity (1998) which are cast bronze. What we see and what we touch sometimes turn out to be two very different things. Touch is tactile and that is what sculpture is all about. we need to touch it to get its full effect. It’s too bad sculpture in galleries is often difficult, if not impossible, to touch. Much is missed when the the tactile is lost in the appreciation of sculpture. It’s almost the same as looking at paintings with your eyes closed.

John Greer is a major artist as recognized by his Governor General’s award in 2008. The current retrospective of his work was long overdue. It’s a shame that its only venue, at this time, was at the AGNS as it needs to be seen elsewhere. Thankfully, there is an excellent large catalogue with essays by a number of writers including a very good biography by Dennis Read. Greer told me that he had wanted yellow caution tape installed at the entrances of the exhibition to warn viewers that their ideas were about to be challenged. He needn’t worry. Everyone who saw retroActive came away with an a new appreciation of both him and his art. 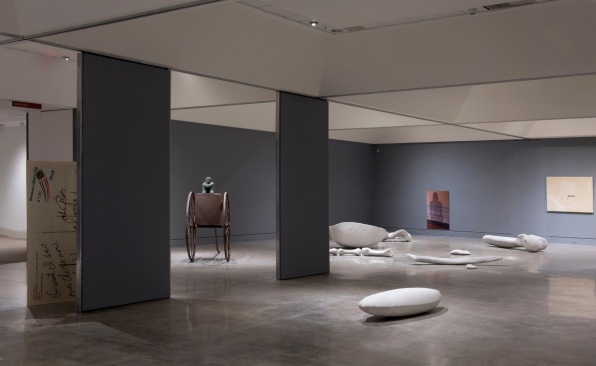 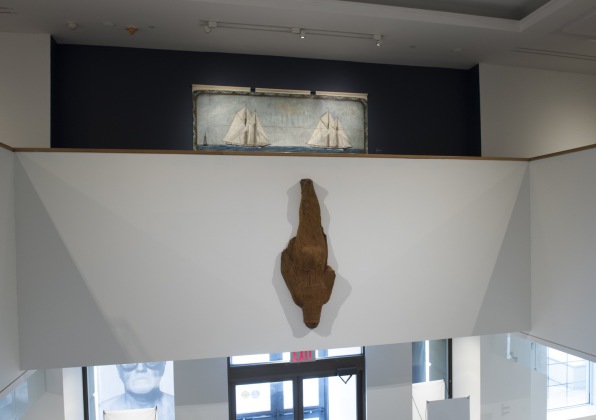