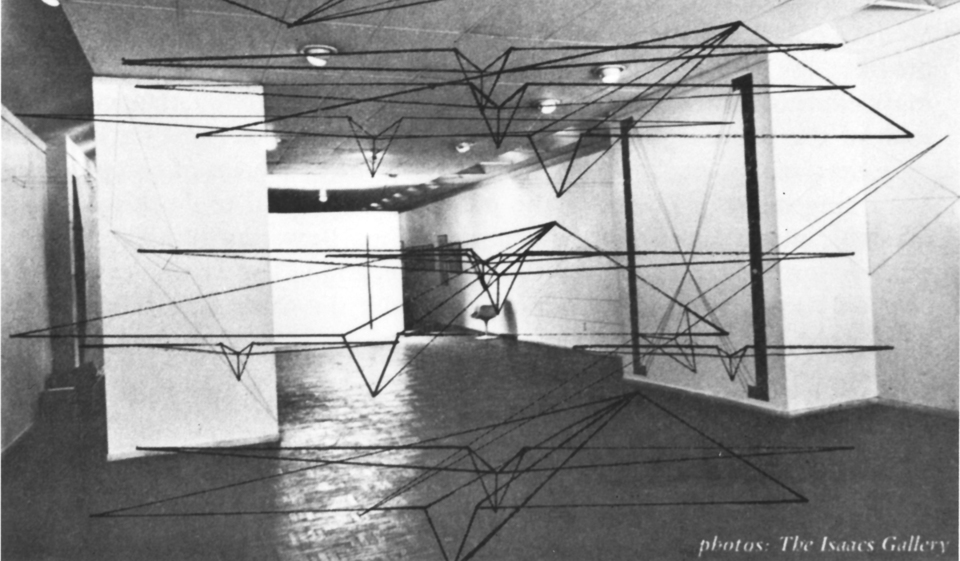 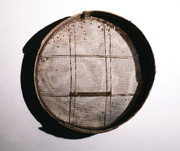 "The meaningful involvement in art hopefully allows oneself making sense of the world one finds oneself in. The cost of art, being life itself, its value is self evident - evidence of the self." (John Greer)1

Looking at John Greer's body of work, you are at first irritated, trying to categorize his work in terms of style, medium and content, and failing to find a category that suits him. On a first glance his work from the seventies and early eighties seems to be disconnected to those forming the main body of work from then on to now. Throughout this catalogue I argue that, in fact, the early work is very strongly tied to the most recent, sculptural work and vice versa. His early works are “sculptural concepts” and the new work is “conceptual sculpture”. All his work is informed by the very own positioning of the artist himself and his underlying total investment, a constant questioning of the positioning of the self, being - oneself - of the world - in the world - thinking.

"He takes responsibility for the way he is within the world, in forming and shaping. The encounter with his work places you as a participant in a similar position of responsibility." (Dennis Gill)2

What is readable in connection with the whole body of work, is, that making art for John Greer is not about giving answers. Rather, it is a process of research, about asking more intelligent questions.

"Art allows one to manifest one's understanding of the world through the articulation of ideas and constructs of the world using form and image. Art is the coalescing of the subjective experienced perception, contextualized in the on-going visual language of one's time." (John Greer)3

John Greer started out with painting, soon afterwards abandoning that medium - he called himself a frustrated painter at that time - in order to turn towards the making of object installations, using a wide variety of materials found in daily encounter as well as language (puns, word plays), photographs, holographs, some technical devices, and the belief in people's common sense and their "respondability" in order to realize shows that "would surround you like a web". (Michael Fernandez)4

Greer visualizes concerns, educating the viewer by allowing him to follow an investigory trace through his surroundings. His work is an extension of Duchamp's consideration of the viewer being part of the "art coefficient". "It is not the artist alone, who is carrying out the creative act up to the end, because it is the viewer who is establishing the contact of the work with its surrounding world, in deciphering and interpreting its inherent values, and thus making his own contribution to the creative process." (Marcel Duchamp)5 With the engaged perception of a work of art, the viewer is completing a process of exchange with John Greer's object installations, is encouraged to complete this transaction and to make an investment that is not humiliating or deceiving, but "leaves you with a much better feeling within yourself" (Dennis Gill)6

In contrast to what was taking place on an international level at that time, namely Minimalism and Pop Art, Greer was getting involved in illusion, investigating the physical playground of the mind and its limits as an intellectual device. This approach manifests a personal interest in the sensibility of Yves Klein's philosophical ideas. Hannah Weitemeier writes about Klein: "It seems that, in opposition to the more mental space of art in the inventions by Marcel Duchamp, the anthropomorphic approach of an artist like Yves Klein rests in a middle position. As if it was about trying out a dynamic harmonization, to bring people that far with their sensual potential that they realize the same healthy basic order in the outside world that works in their physical organism." (Hannah Weitemeier)7   This relocation of the viewers body by physically addressing his mental capabilities is to be found in a similar way in Greer's work.

With his introspective research into life itself, Greer developed a sense of the placement of the self in response to society and began to use a more sculptural language in order to express his concerns. The symbolism in connection to the choice of materials he began to work within the late seventies, early eighties were parameters for a more general, still very unconventional way of consistently confronting the viewer with the perception of all the subtleties of the self as a social, objectified being. Considering the formal manifestation one is reminded of the European Arte Povera artists who were working from a basis that is of a comparable understanding. "It is an art that finds the highest degree of creative freedom in verbal and visual anarchy, in the ongoing behaviorist nomadism. It encourages to constantly check the own (spiritual and physical) degree of existence and it feels the urgent necessity to tear away from the eyes the "enchanting" veil in order to bring it back to the spiritual and physical peculiarity of any human action, that shows a unity which is to be supplemented and to be judged." (Germano Gelant)8

The more specifically sculptural approach was going hand in hand with the witty and humorous object-interplay situations, yet was objectifying skepticism and getting cynical at times by the mid-eighties. At a point where many other artists either chose to take a politically or socially engaged stand, or escaped to the other extreme, exemplified by the art for art's sake mentality, John Greer chose to take on a stand for the sake of art as a mediator between the person and the world one finds oneself in. "By the mid eighties, when the cold war was at its peak, I was getting tired of being cynical. At the same time there was a change in my head..."(John Greer)9

Sculpture became John Greer's language in order to express a primal belief in life and living, objects speak in relation to the symbolism of image and material, denying linear history. Greer is still asking questions, but these questions are those of a scientist who knows that any step that leads him closer to a possible answer unfolds a universe of new wondering and questioning. Knowing and respecting art history and cultural history, he is using their elements for his own purposes. He is applying a system that makes one think of Jonathan Swift's explanations in Gulliver's Travels. Visiting the academy of Lagado Gulliver describes the project of a professor to improve the speculative sciences through practical and mechanical methods. He wanted "with moderate cost and modest physical effort to enable even the most uneducated person to write books on Philosophy, Poetry, Mathematics and Theology without any support by genius or any kind of studies". A frame 20" on 20" filled with uncountable wooden cubes individually moveable with wire by 40 handles, and labeled with all the words of the national language, would juggle in every possible direction in any modus, tense and declension in order to get a total insight in all arts and sciences.

Some other professors were busy with the abolition of words at all..."because it is obvious, that each outspoken word causes a reduction of our lungs and, since it is wearing them out, for that reason it has as consequence the shortening of our life. Since all words are signifying objects, it is easier to carry the things around with us. "When they would meet each other in the streets, they laid down their loads, opened their bundles and would talk to each other for about an hour or so; then they packed their gadgets again, helped each other to put the loads back on their backs and said Good Bye. But for a short talk, everyone can easily carry his requirements in the pocket or under the arm and at home none should become embarrassed. So the room where people would meet, who practice this art, is filled with all things, that are subjects of that artificial conversation." (Jonathan Swift)10

The importance of objects in the described scenery is similar to the sensibility that you find in Greer's engagement with objects. His continuous body of work has developed a system that is based on thorough investigation. John Greer is speaking clearly a language defined by himself with a known and accessible imagery for an engaged viewer.

In 1990 Greer had two solo exhibitions in Canada, entitled "Reconciliation" and "Never the same after words". Both exhibitions are proof of an engagement in the process of art making that is nourished by the ongoing flow of information. This process is defined by the acknowledgement of plurality of timely aspects. Being aware of the formal rupture in his work, but still reconsidering aspects that were occupying his thinking at some point in his life, he is using older work - be it in content or material - next to recent sculptures. He is inviting the viewer to follow and, at the same time, creates an act of balance: tempting our capability of intellectual investigation and overcoming the interaction with illusion in order to fall back onto the limits of the human body.

"A person's body of work is always in flux; and older work is more retroactive than retrospective until that person no longer continues to work. It is a mistake to look at works of art as mere finished products, like other products of our society. Art works must be timely, but that must not be mistaken for fashion.

...Art objects are manifestations of complex ideas - ideas given form and their relative position must remain flexible. Art objects are different from such things as Styrofoam cups. The reason for their coming into existence is not to fill a niche but to help us understand our relationship to and our place in the world." (John Greer)11

1 John Greer in a general statement on the function on art, Skulptura Montreal, 1995

2 Dennis Gill in conversation with the author, Halifax, June 1996

4 Michael Fernandez in conversation with the author, Halifax, June 1996

6 Dennis Gill in conversation with the author, Halifax, June 1996

9 John Greer in conversation with the author, Berlin, 1997