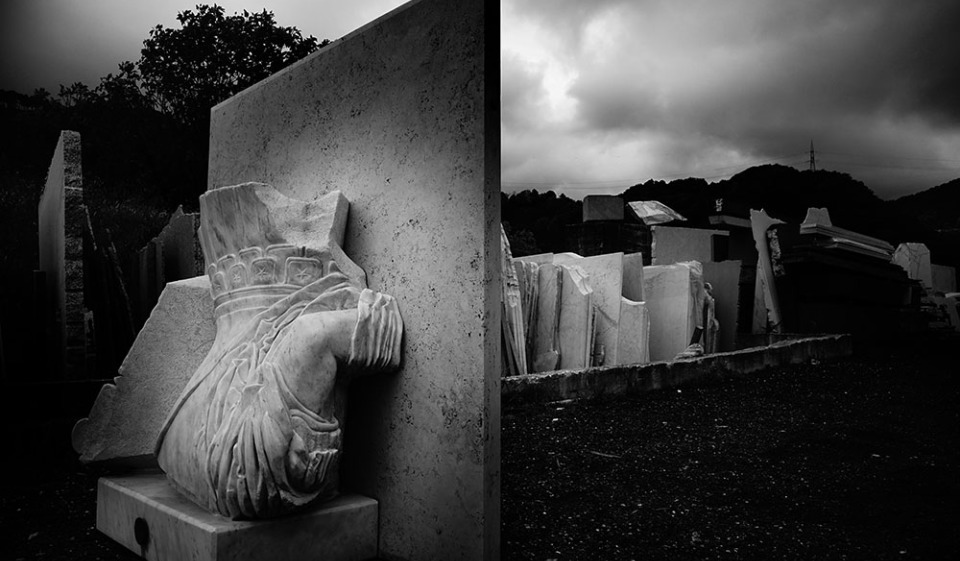 Civilizations are like distant islands immersed in a sea of time for Greer. An early interest for him was the way memory, and the way we shape forms into symbolic ideotypes, whatever culture we come from, results in the recreation of sculptures or artworks that are essentially constructs. It could be a Kouros from ancient Greece, or a classical Roman marble, but these works are confirmations of tribal, imperial, or colloquial mindsets. Our past, the civilizations of the past, over time, became instruments for  Greer’s imagination to play with in his art. The act of reconfiguring aspects of the past, and of nature, of this earth became the basis for an art engaging our place, our sense of identity, but only as a conduit for breaking the molds, the very constructs we consider unchangeable. And so ancient became a part of the contemporary dialogue.

John Greer’s dialogue is not really with civilizations ancient and modern or post-modern, but with the way we build meanings, structures for representation, only to consolidate perceptual stereotypes that close us off from the moment, the place we are, the energies of life and perpetual flux between interiority and the surface of things.  Greer’s sculptural process uses conventional materials to challenge the appearance of things. Large scale works like The Sirens (2011),  Res Isa Loquitur (2005-2009), Cradle (2011), or Fuse (2013) use granite, marble, travertine, bronze and stainless steel, and though sculptural, elemental, they engage us as on site installations.

The dialogue with time recalls Byron, Fuseli, and the Romantic movement. Greer fragments the discourse with intentional cues to what we consider sacred, or ancient, engaging in a demystification of our very stereotypes of art of the past. What looks classical or natural, taken out of context, reinvents the ancient.   Civilization consists of fragments, of bones, of classical sculpture or architectures. What resonance we feel is a cadence, an echo of our own bodily presence perhaps, of humanity’s collective and conscious memory, of that which remains, as if civilization itself were a mere construct, its races a memory we recreate to perpetuate a sense of time.

The remnants, traces may reference architecture as readily as the human form, for the message is as much about structures, entropy, as it is about the way we build symbolic meanings over time, between cultures, over the centuries. And so continuity as much as the postmodern break with all this, id part of the evolving language a meta-language of Greer’s art.

There are poetic evocations of the ancient past, but Greer’s sculpture is hand-made, non-product assemblage ready-mades, as readily as any Marcel Duchamp bicycle wheel or wine rack could be. The distant ghosts of ancient art, and contemporary sensibility co-mingle in the marble, the granite. John Greer’s comment on the Duchampian gesture is that, “This is about having faith in the natural world, and having an understanding of the human construct, and tying the two together.” 1

Sculpture, for Greer, captures facets of the image culture and throw them back at us as real life tactile re-processing of all that art, and of our memory of its conceived and very real existence. The back and forth from image to symbolic art object is part of a non-linear game Greer plays. The game carries echoes of the very structure of language and myth, of the human perceptual system we all use. This is something universal and common to all peoples and cultures.

Memory does not unravel, whatever era we live in. It is universal like the structure of a house, those fruit seeds, that leaf, that archaic body sculpture. All this exists in a continuum, with temporal distancing. We sense the distance. Sculpture becomes paradigmatic, illusionistic, just as it is physical, three-dimensional.

An active participant in the Nova Scotia College of Art and Design in Halifax, John Greer taught sculpture there for 26 years during its most productive and internationally active era. Under Gary Kennedy contemporaries such as Vito Acconci, Sol LeWitt, Dan Graham, Eric Fischl, Lawrence Weiner, Joseph Beuys and Claes Oldenburg brought a conceptual fervor as invited participants at NSCAD. Young artists visions were ignited and encouraged to further the exploration. The influence of NSCAD could be sensed in Greer’s “Suspension-Tension” show at the Isaacs Gallery inToronto in 1970. Black elastic strings were nailed to, and between, walls. A system of three-dimensional lines akin to Fred Sandback’s challenging string sculptures built illusionary planes of conception in the open space of the gallery engaging the viewer with linear constructs. Greer’s gradual shift into three-dimensional sculpture had begun with these spatial drawings. How we deal with images in space, and an extension of perception became something that could challenge us.

In that era when ideas dominated the language of art, John Greer persistently sought to raise questions through his art about the tactility of things; the way light and density could play with form. He even talked about the gravity, the mass, the center that can bring a balance to everything. These are elemental concerns,  and are structural in an environmental way, as much as perceptual.

As a sculptor Greer develops a dialogue with our places as humans within a larger context. Context, for Greer involves civilizations, its discontents. The aesthetic and cultural variations all come together in a moment in time. We just transcribe it all, manifest it different, according to time, place, materials, and above all - experience. The traces of one life lead to another.  What is interesting with Greer’s sculpture is to witness the transformation from conceptual art and its concerns towards a broader, more open dialogue on  sculpture’s evolution, something that brings us full circle.

Reconciliation (1989) with its larger than life plum, peach, apricot and cherry seeds sculpted out of marble, all exhibited in an array, and with a central bronze leaf form supported by a tree trunk section went from sculpture to installation. Greer generated a spiritual, sacred aura to this “offering”.  The scale shift, like that we see in Claes Oldenberg’s sculptures changed our perceptual relation to the forms, and challenged the way we see what looks natural, to challenge the appearance, and real-life basis of things., Again, Greer seeks to challenge the image of something, presenting another level, as if art were an extension of our the structural way we view, interpret and conceive of the world around us.

The Sirens (2011) have derived from Archaic Greece marble carving. Their patterns, the clothing and hairstyles, all generate a sense of archaic mystery. It ends there. The stainless steel fronts are flat and mirror-like, reflecting the surrounding environment like mirrors. This united front of archaic feminine beauty seen from behind stand as still as time itself on ten tons of black granite, a core earth material  These ancient women are steeping out into a new world.

Cradle (2012) reflects on the paradigm shift, that has occurred as visions of the earth as an object, seen from outer space become increasingly common. Cradle builds it’s dialogue by creating an enclosed space. The space becomes a place to ask questions perhaps about the origins of civilization(s). The space is both symbolically closed and open. We see the backs of twelve male and female figurative sculptures derived from Mesopotamian sources (ca. 5000 BC) facing inwards. The sense is of a closed, even tribal conformity common to all ancient cultures. Cradle celebrates our ancient origins, but exclaims we have to go further, to go beyond the security blanket of proven cultural sources. The same goes for Civilization (1992) with its bone fragments from a body. The bones are denaturized, and the dialogue is about human memory, traces of experience and the way we recount, reform, reconfigure experience. Money Wagon (2013) is literally made up of Chinese coins, a structure made of something as abstract as money, a medium of exchange manifest in its coin form. Is this equation a commentary on the culture / market paradigm? Who knows?

Demystifying art’s role is part of the purpose of John Greer’s art. The structures of sculpture, are clues of the way language and perception builds our structures, our art, our literature…. His presentational style always presupposes the scale of the human body, and of a locus of perception that relates to the body. We think of Michelangelo Pistoletto who referred to the “figuration of time”  neither here nor there the human figure is as much a signal, a mirror of the human presence, and idealized, the body becomes part of a ontological dialogue between art and life. Art holds the mirror to life. Or is it the other way? Greer seeks to build a continuity using these forms, whether natural, human, or synthesizing the two, merging aspects of sculpture through the ages, he performs the role of image-maker, holding a mirror of life to the viewer. As he says, “The world is an object” and sculpture too…

All images below by Raoul Manuel Schnell. Please click on any image to enlarge, or activate the slide show. 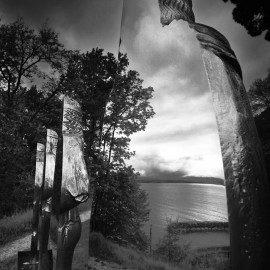 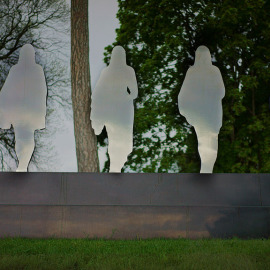 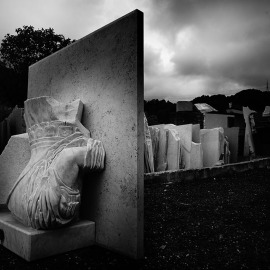 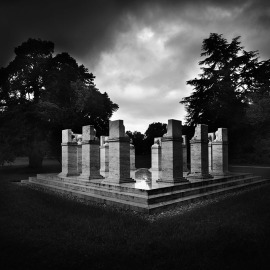 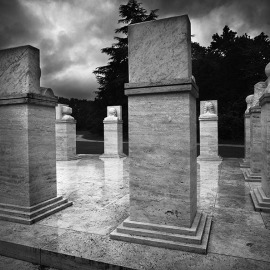 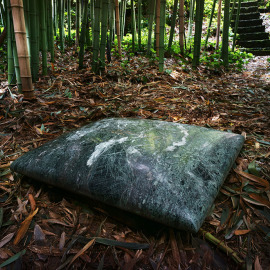 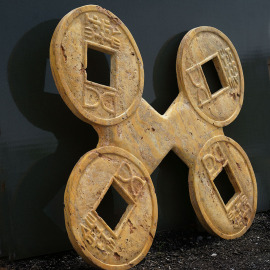