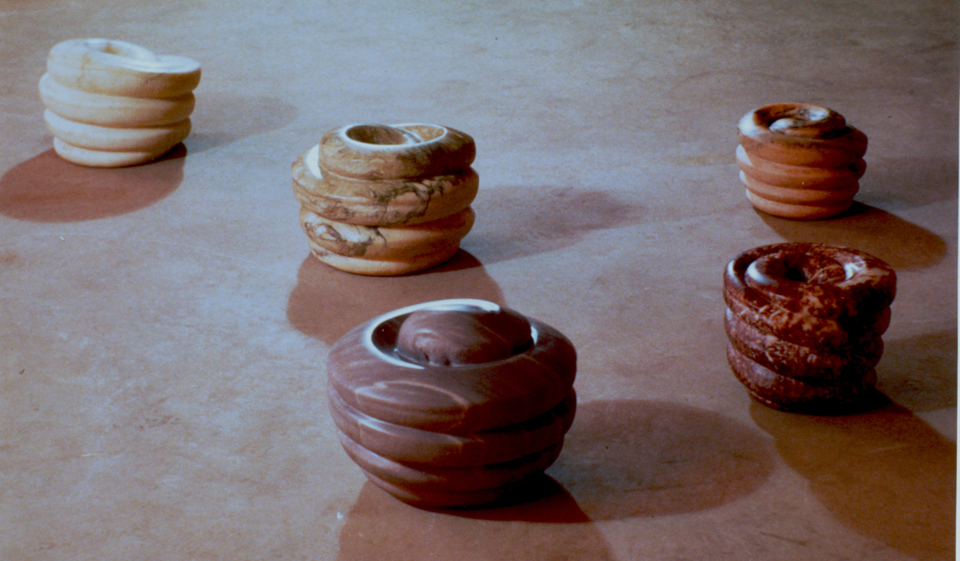 The exhibition "Connected Works" was realized in the Dalhousie Art Gallery in Halifax, NS in 1986. It consisted entirely out of works that were realized during a five-months stay in Pietrasanta, Italy. A complex associative meaning enriches the powerful formal qualities of the works. Greer intensified his concerns of perception in regard to a personal identification. The impact of the use of marble goes hand in hand with an imagery that is working on a general level - Greer is working with the symbols of the comb, the serpent and the axe-head, but he includes in the diverse pieces a very personal approach to the symbolism. The earlier described "Temple of the Order of Chaos" 1986, is the largest single work in the exhibition. This visual statement for the human sense of order is reminding us of our ancestral heritage. The imagery and the material work together in their meaning and the sculptural object is confrontational as a manifest of human ability to give form to mental potential. The work "Sleeping Wills" 1986 is dealing with human will as an energy potential on a different level. The work consists of five pieces of carved marble with a diameter between 21.6cm and 33cm in sizes, which are installed in visual proximity to each other, so that they create a visual field to walk through. The forms resemble coiled snakes with their head tucked under as well as they remind you of a fist with the thumb tucked in. For Greer the serpent is a symbol for energy potential, with reference to the hand, this is connected to the human act. "If all symbols are really functions and signs of things imbued with energy, then the serpent or snake is, by analogy, symbolic of energy itself - of force pure and simple; hence its ambivalence and multivalencies." (Dictionary of Symbols)

The carved marble snakes tempt our vision because they appear to uncoil with our movement among the pieces. The tension that is built up seems to contain a dangerous element, so that the forms produce alertness in us. In reference to the sleeping will, this work speaks about self-control and control of human endeavour. The level of experience is directed just as we are directing any of our activities. The sculptural objects are connecting the human mental construct to the act of experience.

This work is integrating the viewer, defining him as an object among objects. It is a work that shows that sculpture has to be experienced with a physical action like walking, going around, investigating from different angles. What causes a change in a person through the encounter is defined through the experience of different viewpoints and different distances. The work defines the person and the sculpture as constant quantities in relation to each other. Through the imagery and the chosen material, the single objects do have a strong impact in themselves. With a work like the "Sleeping Wills" Greer is starting to accept and to consciously include the sculptural qualities of the object. A certain "aura" enters the art event, which evolves in this case the experience of a distinct atmosphere of human heritage. The work creates a "place", a "location" which has the capability to include and absorb an engaged person.

In connection to an exhibition called "Steine und Orte" / "Stones and Places", which included original old-Mexican stone sculptures and put them side by side with contemporary sculptures (mainly involving the geometrical shape of cubes), Rolf Wedewer writes: "Withstanding all differentiation in the signifying detail, the old Mexican figures are of an inner sculptural coherence and at the same time characterized by a formal dynamic that is simply astounding. (...) You have to consider the shown variations of the motive of the "serpent" under the aspect of a formal richness of inventions (...) and yet, despite the density of the form and the shape, you feel the latent aggression of the serpent, since it is not illustrated, but characterized, and that through the conceptual form, through the concept of form: this is an example for the power of expression of a construct of form and for the fact that this expression is more than a psychological category. Through the force of the form, something immediate is recalled, which is in its true sense the subject of the sculpture, and yet remains directly and factually clearly outside of our perception." (Rolf Wedewer)57

Greer combines a form-principle with ancestral imagery and manages to put this into a conceptual context, which situates the various levels of understanding of the work into a contemporary context. In turn, he is connecting actual concerns, using his model of time as accumulation of form and content. As we will see, Greer started at that time to use imagery in connection to conceptual arrangements and takes advantage of the imposed sculptural qualities of stone as natural material. The used images are translated into objects and gain a significance that is standing for its own meaning, not for an idea as would be a symbol that is used on a two-dimensional (picture) plane. The tactile qualities of the objects and their physicality leads to a profound encounter in the space we are in - together with the work.

Wedewer is working out the difference between the form of depiction and the form of human conception and connects them to individuality and finiteness versus a global constant in the space of timelessness. "The artistic regulation of form as form, should be seen and understood in analogy to constructed reality. From that approach it becomes evident, that and why conceptual constructs of form in pre-scientific cultures signified and created the true forces in direct presence, be it ghosts, gods or whatever mythological defined figures." (Rolf Wedewer)58 Greer uses a similar approach to depict what is to be experienced in the described antique sculptures - seen from today. He uses images that are reduced to their sculptural presence, their presence as objects. Through their physical existence and the underlying conceptual ideas and form-principles, Greer is throwing them into the now by involving a package of heritage that is beyond a linear history and therefore opens for a re-disposition of formerly timely aspects.

"Resonance" (Capacitor) 1986 is using this approach on time and is visualizing it through a binary system. Two identical forms of two different materials confront each other. The marble one is the "mother", the offspring is a bronze cast, polished to high reflection. The forms are wide enough apart to give room for a person to walk through. The spiraling forms are turned half way, so that they start to visually unfold into each other through the viewer. The forms complete a dialogue, visually by connecting a relation and reflecting on each other, and virtually, through the mental completion of their initial relationship and their quality as objects.

With the discussed works, next to a couple of drawings and a touchstone ("Folding in on Itself"), Greer uses this show in order to refer back to some previous installations and speak out a concern for the continuum of a thinking that is based on traditional elements that are modified and underline a time relevant meaning. "Caligula Dreaming" 1986 has a strong focus on the interrelation of form (image and material) and the underlying idea. In this piece, another coiled serpent, carved in black marble, is resting on the floor, the tip of its tail standing up in a state of unrest. It is sitting on a large felt mat (long enough for a person to lie on) in the shape of an axe-head, the shadow of the goddess of technology. This is in turn framed by an underlying canvas ground sheet with serrated edges that are painted red ochre. The use of material is conceptual in its choice, but the work has an impact as sculpture object. The title refers to the story of Emperor Caligula: "He dreamed mankind would be reduced to one, destined for the axe." (John Greer) For Greer it is not clear whether this dream is an aspiration or a nightmare - and he connects it directly to our current "sleep" in the shadow of technology. The imagery is working in relation to the viewer's scale of body, and is creating an atmosphere of tension through the physical commitment.

Last but not least, Greer showed in this exhibition the early version of "Chamber of Desires" 1990: "Kouros in Flight" 1986. This work has been discussed earlier. It works in this exhibition, too, by "preparing" the viewer for the mental delight of a physical encounter.

With the work up to the mid-eighties, Greer was on a very productive search, trying to define boundaries for an articulation through and with the world of objects. Language means form, and the idea that produced form. Greer sensitized the viewer for a language that he was defining for himself, exploring the known and the unknown of being and of what art can be. Taking the early works as "language-class", it is most satisfying and enriching to enter the dialogue with the late body of work by the artist because the requirement for a successful and essential dialogue is the understanding of the language that gives form to an approach.