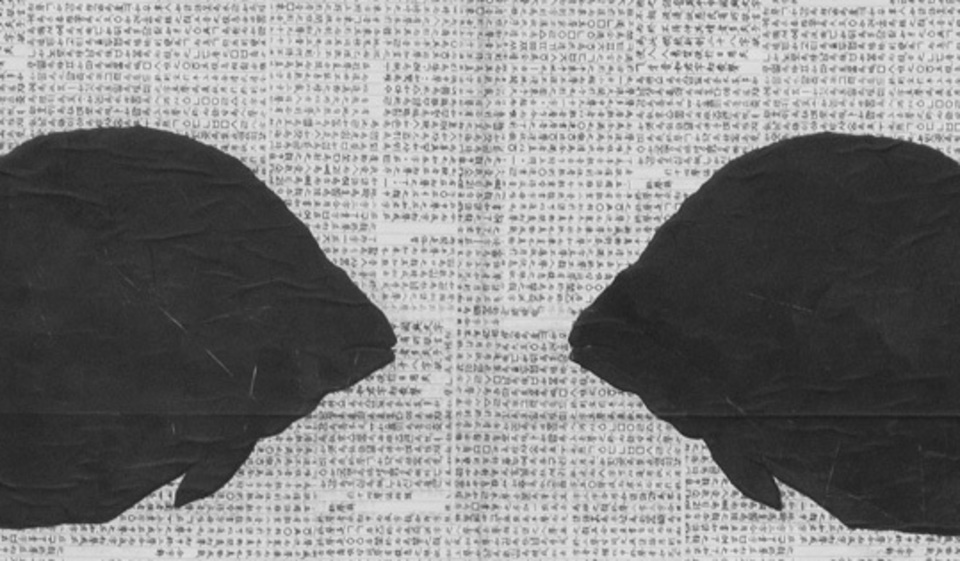 In this collage I am working with visual elements in order to represent sounds – soundings.
The background in this collage is from the proclamation of Hangeul, Korea’s official language, a language that was given to the people by King Sejong during the mid-15th Century to replace Chinese writing (1443/1446). I found this paper on a market in Seoul, Korea.

Letters corresponding to sounds is the visual representation of the spoken word, a powerful tool in forming a culture. Transcending the oral to the visual. In this particular case I find it very fascinating that this happened on a specific date – what a monumental change for a society.

In this work I am using the text as a representation of the sea - Cosmic fish on the cosmic sea. As a child I saw a huge 700-pound halibut, still alive, conscious, lying on the wharf and looking at me. It was the most awesome thing I had ever seen. To date we don’t know what shape the universe is, so, to me, it might as well be the shape of a halibut. As that, it is a recurring motif in my work.

(Please see also Cosmic Fish) The cosmic fish, when reflecting on itself becomes representations of eyes. The elastic cord embedded under the text, is like a fuse and a depth string as well. It is a tool in order to sound the depth (nautical term sounding) and in this collage it is as well representing the horizon. I have used dressmakers elastic on and off in my work since 1968.

“Soundings” is for me a rather complex piece. It reminds me of a time in western culture when it was illegal to read the written word silently in libraries in Rome. I often think that if you write the word “I” and read it out loud, the sound vibrates from your body. It is a social act. However, when you read it silently, in a way you separate your body from your mind and then you take it back in again, without the sound waves radiating into the Cosmos. Reading silently is a personal act – not a social act.
“Soundings” is a musing on the meaning and the physical manifestation of language to the individual and the collective.