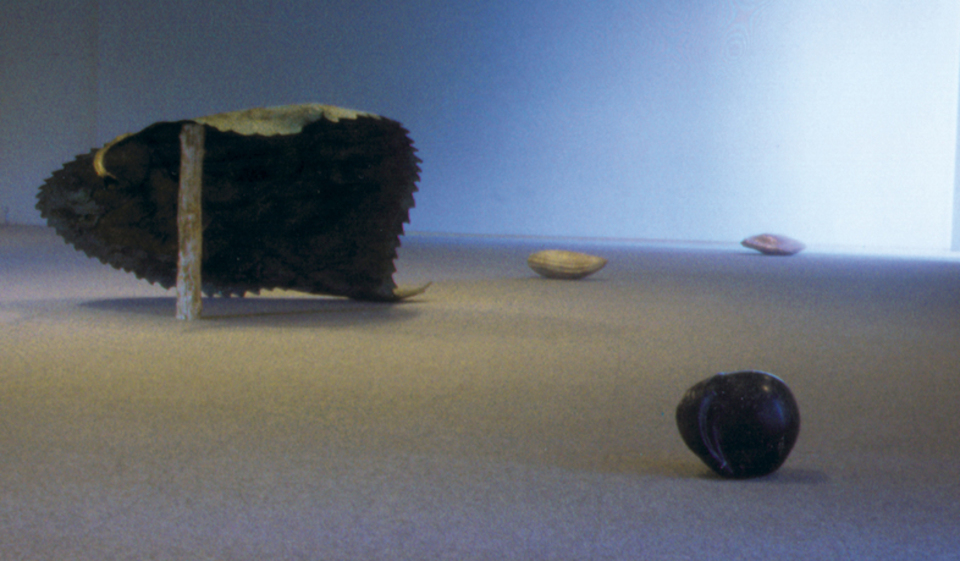 A brief presentation of the show "Reconciliation" that was realized in the same year as "Never the same after words", is useful to give an insight in the duality of Greer's body of work. Literally jumping between object installations, using a variety of materials and devices out of every-day life and a sculptural approach, using traditional sculpture-techniques of art-making, the artist is insisting on the complexity of a concern that is submitted to a stand for human engagement, a conscious responding of the individual to the world. Through its diversity and consistency at the same time, the work is witness and prosecutor for a most interesting view in the world.

The work that is entitling the show, "Reconciliation", consists of five coloured marble stones in the size of "domestic furniture"(Greer), each shaped with a commitment for detail and surface in the form of a kernel of a specific fruit. They are scattered on the floor, surrounding a large leaf made out of bronze, which in turn is resting on a wooden pole, so that the space underneath is large enough to give shelter for a person.

The use of space - integrating the viewer into the art-"event", the scaling, the use of symbolism, the language of the chosen material, the factor of time; these are aspects that build up the relevance of the work and will be discussed in regard to the artists personal "philosophy" of working.

A work like "Reconciliation" is literally grounding the viewer through its presence and the evoked connotations; in this case it was shown together with a piece that is referring to the state of buoyancy, flight; an intellectual and visual play that makes your head spin around. In order to reach "Reconciliation", the viewer had to step through the "Chamber of Desire" 1990, in which John Greer is juggling with symbolism and imagery in two, three and four dimensions, the last one being the intellectual projection that is beyond space and time. Elements are: elastic string - formed into the linear shapes of paper airplanes that are two-and three dimensionally crossing the room, colour Xeroxes of birds in flight, mounted to the wall, postcards of an ancient Greek sculpture, the "Kouros Milani", which are integrated into space by elastic string that seems to be held by the pictures of the figure, connecting one to another between walls.

Knowing John Greer's work one is familiar with that imagery which brings us back to the roots - his first important exhibition at the Isaacs Gallery in Toronto: "Suspension-Tension" 1970. 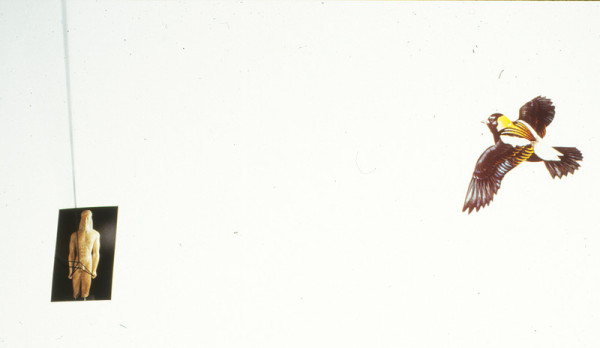