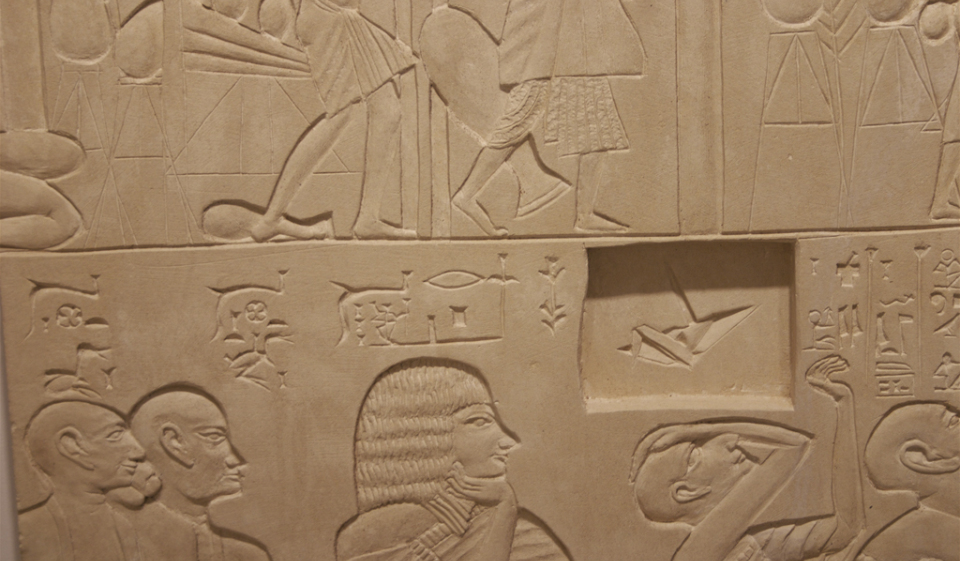 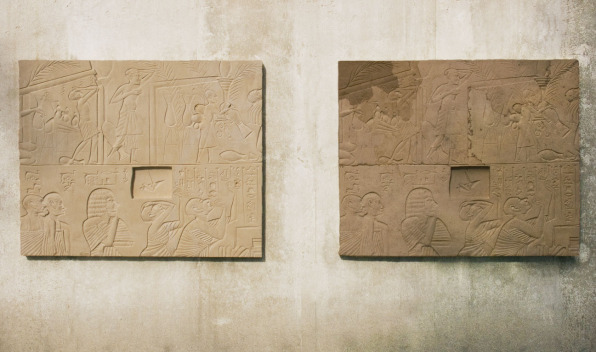 John Greer’s sculptures raise interesting questions about appearance and reality, the changing reference points for any contextualized object. His objects, which are filled with ancient Egyptian and archaic Greek references, serve as containers for meaning. Age of Irony (2006) is inverted like a Baselitz painting, a sculptural relief of a woman’s back. While the long braided hair could be archaic Greek, the clothes could just as readily be of our time. Like so many of Greer’s sculptures, Age of Irony is enigmatic, evoking a feeling of duende, or ambiguity. Is this a happy or sad icon of femininity? The theme is beatific, and yet we feel the body is preconceived, a construction. Greer commented at the show’s opening that the genesis of this idea came from seeing Rodin’s Age of Bronze in plaster.

Gravity (1998) animates two feather forms, making them into surrogates for the human figure. One feather seems to bow to the other, which lies on the floor. This material animation recalls Greer’s monument to the Humanitarian Workers in Ottawa, adjacent to the French Embassy, a gateway-like structure made of similar feather forms. The Source (1998), an older bronze piece, resembles a seedpod that simultaneously reads as natural and sculptural object. This confluence of potential readings questions differences between the natural and the manmade.

Most of the sculptures in this show displayed a self-evident symbolism, some of it borrowed, some of it confected. Sometimes, Greer references a more contemporary cultural context, as with Hiroshima – Texas Limestone (2007) and Take Off, Little Boy! (2007). These two near-identical wall reliefs, collectively titled Reproduction (the right one has aging and stains), follow their model – an ancient Egyptian relief sculpture now in Berlin – as closely as possible. Greer’s innovation is to produce the work in duplicate. Like Lucy Skaer’s Black Alphabet (after Brancusi), which replaces bronze with coal dust, Greer’s sculptures play on and with the notion of original and copy. Using Texas limestone, polystyrene and epoxy, he created an origami crane for a cube-like space that was empty in the original. The crane is a symbol of peace in Japan, and the title references the Little Boy nuclear bomb dropped on Hiroshima. By using the empty space within an ancient sculpture to respond to destruction, Greer makes us consider the sculpture as a container with many potential interpretations.

Greer’s “Apprehension – Appréhension” exhibition was all about context at the point of creation, and how a sculptor can play with surface appearance and materials to create meanings through symbols reinvented for the 21st century. What is ancient is new, and what was classic instantly becomes contemporary; nostalgia makes wayfor a perpetual re-creation of myths, symbols and meanings. Greer’s work exposes a very transparent and manifest love of the matter that links us to a more universal and mysterious energy. - John K. Grande

All images on this page by Raoul Manuel Schnell. 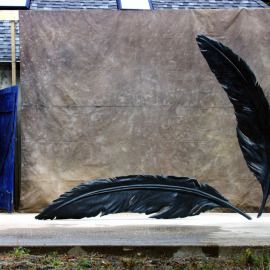 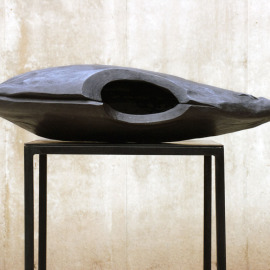 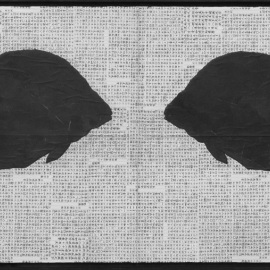 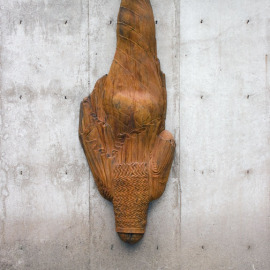 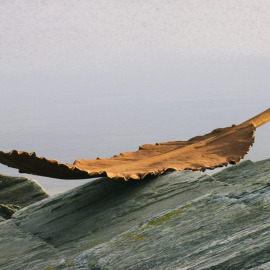 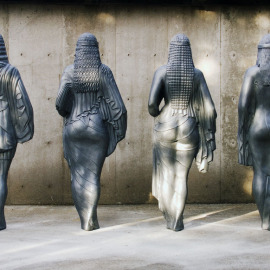